About Putting for Parkinsons

Putting for Parkinson’s is an annual golf outing and fundraiser with the goal of increasing public awareness of Parkinson’s Disease and raising money to help fund medical research grant requests through the University of Cincinnati’s Gardner Family Center for Parkinson’s Disease and Movement Disorders. Through our tenth fundraiser last summer, we have raised over $250,000 toward this cause. For the past five years, 20% of our net proceeds has gone to specific individuals suffering from Parkinson’s Disease who might need a special medical device, DBS surgery, a home handicap alteration, or a piece of equipment, but might not otherwise be able to afford it. 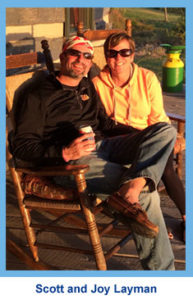 The event organizer, Scott Layman, personally understands the importance of helping to fund Parkinson’s research. He  was diagnosed with Parkinson’s in 2009 at age 43. It started with shaky hands, being off balance and impaired speech.

Scott had Deep Brain Stimulation surgery in 2013. This ground breaking procedure is used to treat a variety of disabling neurological symptoms—most commonly the debilitating symptoms of Parkinson’s disease, such as tremor, rigidity, stiffness, slowed movement, and walking problems. Since the surgery, other than some seldom speech issues, most people wouldn’t know that Scott has Parkinson’s. He feels lucky to have been able to have the surgery and contribute to the research of his disease. Scott combined his love for golf with the opportunity to support Parkinson’s research.

To read Scott Layman’s personal letter addressed to all his friends regarding Putting for Parkinson’s, click here.

Letter to My 13 Year Old Self

Click here to read Scott’s speech from the 2018 Golf Outing.